This is the first page of a sub series within the ‘evidence of people having ‘invisible’ high tech implants’ series!!!

This sub series is focused on describing and then explaining some ‘exceptionally’ weird anomalous experiences that I myself have had (despite that paradoxically I’ve also not been allowed to take too much notice of these specific experiences either)!!!

Basically, I’ve recently managed to think about some very specific weird experiences well enough to attempt to write some decent pages on these.

The original reason for the main series was to present some examples of some very specific types of ‘highly’ anomalous experiences that are the outcome of various people in our fake reality here simulating someone that has some type of high tech neural implant such that they then have permanent and or ‘occasional’ experiences during which they exhibit highly unusual ‘abilities’ specifically because these are the abilities that are due to enhancements that the person they are simulating had!!!

However as the writing of the new sub series progressed it’s ended up presenting two intertwined ‘topic threads’, one covering the subtle body skillwire implants and the bizarre ‘abilities/experiences’ experienced by people that have this type of implant . . . however, in that many aspects of these experiences are then difficult to explain without decent context, then I’ve ended up having to give very accurate descriptions of ourselves as subtle beings that also then included decent, accurate details of our subtle bodies, the subtle environment AND also the general/normal ‘living’ circumstances of subtle beings within the ‘natural’ subtle environment too.

The resulting outcome is that this series is now even more interesting BUT it’s also taking way longer that usual already LONG TIME to write these types/quality of pages, likely because our fake reality isn’t keen on having any descriptions of certain things never mind very detailed ones . . . so for various reasons, these pages have taken a lot more effort to write compared to most other series I’ve written . . .

So, the bottom line is that this page and then other later pages of this ‘addon’ series when they are eventually presented on soul-healer.com may possibly be updated at a later date because in writing new pages I then become aware of more detail and or more examples and or think of better ways to explain things I’ve already written . . . plus this happening is also often prompted by people leaving comment/feedback too . . . which of course only happens if they are posted and then read and then commented upon . . . !!!!

While working at Newcastle University I’d quite often go into the town/city centre for my lunch break to do some shopping, get sandwiches and or have a sit down meal. Basically I’d make use of the opportunity to ‘get out’ and have a decent break.

However, while doing this over many years I noticed that I would very occasionally make some very odd ‘mid’ route changes at particular times. Basically I’d have made up my mind where I was going and the route I’d take and I’d be walking off following that route, when ‘suddenly’ for no discernable reason and literally from one step to the next I’d cross the road or shoot down a side alley and find myself taking a completely different route NO MATTER HOW MUCH OUT OF THE WAY it was with respect to where I was heading.

The other very odd thing about this was that my entire self would behave as if I meant to do this. There was no ‘WTF’ reaction, also no ‘thinking’ about this ‘out of context’ route change as well as no startled or furtive looking around, it was immediate and seamless and always presented as ‘normal/what I mean to do all along’.

I also didn’t actually ‘think’ about this happening while taking the changed route nor afterwards either (I was vaguely aware ‘in the background’ of myself being guided/taken on a very different route to the original, while also being vaguely aware that all of this was very odd and particularly as there was definitely no reason that I could fathom as to why I should or would make such a sudden and in many cases a spectacularly different alternate route change.

I experienced these types of auto switching to an alternate route experiences fairly regularly, they likely happened every 2/3 or 4 months over many years, however, it was only, after literally many years of this happening likely every few months that during one of these route changes I decided to force myself to semi-abort the new auto route change and very specifically to check what was going on/what I’d encounter if I HADN’T BEEN DIVERTED AWAY!!!!

So, in the map below the BLUE route is down Newcastle Upon Tyne’s, Northumberland main street and is the route I was taking. The RED route that diverges off from this is the one I was supposed to take, the FUCHSIA route is the one I took and the ORANGE point is where I became aware of and hear a SERIOUSLY UTTERLY UNBELIEVABLY rowdy, obviously either drunk or drugged or both party of about a dozen making their way down an out of sight side alley (DARK GREEN).

They were unbelievably loud, were obviously out of control and were obviously harassing people in the street. From the ‘point’ where I was made to cross the road there is no way that ‘physically’ I’d have been able to ‘pick’ up their presence way back down their own route before it would intersect with mine. 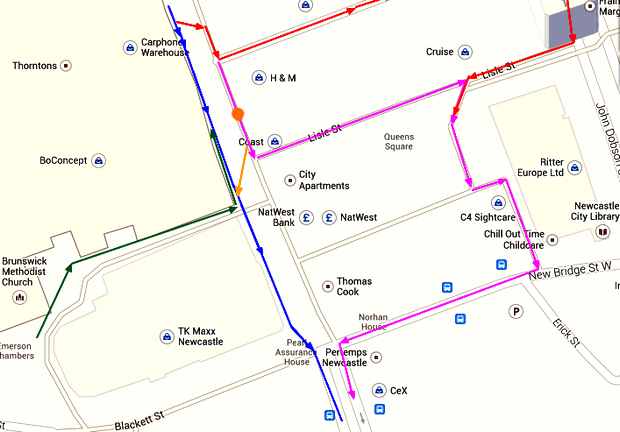 Still walking down the street I was just about at the ‘Coast’ corner when they emerged from the alley on the opposite side of the street I only saw them for seconds but this was enough to have me head immediately right into Lisle St to reconnect to my original ‘forced’ alternate route.

In other words. I appear to have some automated ‘dangerous situation, circumstances and or crazy people’ detection system that automatically and remotely pre-checks for potential ‘dangerous’ encounters and then seamlessly automatically re-routes me well away from these.

During school, late teens and early 20’s I was aware of seemingly attracting the attention of ‘odd/abusive’ types/people and of being targeted in terms of these specific people being intent on picking on me or otherwise causing me problems, including trying to bully me or otherwise go out of their way to pick a fight with me.

I should point out that I never considered myself bullied because I seemed to be difficult to corner or even find to be bullied. Actually in thinking about this more (while rewriting/editing this) I feel/suspect that I’d often find myself deciding to move position/just walk off/away from where I was standing (in the school yard) and head off to hang around somewhere else.

In senior school, I can remember suddenly looking up and on seeing a huddled group of 4/5 kids at the extreme opposite end of the school yard on a raised side area with only their shoulders and heads visible above a wall who without looking at myself or of giving any indication of being interested in myself at all, all suddenly break away in different directions from each other at a dead run, I immediately and without looking at them or checking what where they are going/headed for, I sprinted towards my school ‘house’ entrance and managed to arrive there just as one of them tries to grab my arm.

In other words this was another ‘sign/tell’ of my early warning system in operation.

Now, the above, within Newcastle walking incidents all happened well over 2 and a half decades ago and likely started happening 3 and a half decades ago although the school yard incident is likely of 45 years ago now but I was recently reminded of what I’d already written about and described above (the original example above was written about 4 years ago now) because I had another substantially equivalent experience more recently which I’ll now describe . . . on the next page . . .