Commonly used technology always advances to continually give us more sophisticated versions of what we already have. For example we started out with ‘wired’ phones, which as they became cheap enough were installed in the homes of more and more people that could afford them. Initially you could only make local calls BUT over time the scale of phone connectivity became larger and larger. Then communications shifted from fixed, wired devices to portable wireless devices that eventually reduce in size and while also functioning pretty much anywhere. These same devices also began integrating other functions such as a still camera, then video while also playing music.

So, the best way to become aware of implanted enhancement possibilities would be to think about what we ourselves are currently, commonly using now as external hand held devices and then to think of how these devices would evolve into personal enhancements and then into fully integrated implants.

A very good example of a device that shrinks the boundaries between a hand held device and an implanted enhancement would be google glass. In which case lets think about and consider how someone with a google glass type implant would result in them having EXPERIENCES that would be ‘anomalous’ compared to what would be considered to be ‘normal’ experiences for ourselves as humans.

Let’s start with google glass as this will give you some idea of where things are headed in ‘technology’ possibility terms. So, let me conceptually’ walk you through this google glass implant enhancement possibility now . . .

You can ‘easily’ just with google glass as it is now record and save ‘whatever’ is in your visual field AND it wouldn’t then be too difficult to have these images categorised and saved by some automated system which could also be organised to have you easily recall any image or scene that is part of your past saved data. 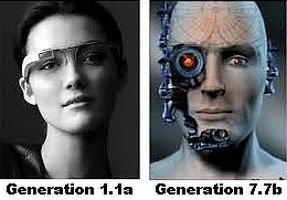 It would also be easy as well as likely that at some point a google glass implant would offer the ability to zoom in on specific images and to even do this for immediate scenes that you are particularly interested in and want to see greater detail. All you’d need for this type of zoom feature would be to have high enough resolution of recorded and saved images to allow you to immediately zoom in and have presented close up, more detailed images of the specific part of the entire field of vision you are currently viewing. Your eye movements could even be be tracked to know what part of the external environment to zoom into AND this zoom could be initiated by either some direct mind command OR the implant may just do this automatically based on what your thinking indicates you want done. Check out the pictures above to give yourself some idea of how google glass (on the left) might evolve into something quite different (the picture on the right) in a few decades time . . .

An early effort human eyesight zoom enhancement that is under development is described here.

Yet another likely option of any google glass type implant or enhancement would be to allow you to ‘freeze’ a scene and also to even record and to then play back external scenes.

So, if we have people here and NOW simulating someone that actually had some type of seriously advanced google glass type ‘visual’ implant, enhancement built into their head (see the picture on the right) then what weird, anomalous experiences / abilities might they end up having because these experiences are part of their script?

In these circumstances, people here will very likely end up have specific experiences that directly relate to an implant the person they are simulating has while they themselves not only don’t have such an implant BUT they’ve not even been developed here yet?

Have you Experienced Your Eyesight Automatically Zooming in on Visual Details?

Keep in mind that the human eye doesn’t have a zoom feature nor any automated visual replay or freeze frame facility.

So, have you reading this ever experienced any:

Do you reading this know of anyone that has experienced any weird and particularly impossible vision effects? Have you yourself experienced anything of these either?

Have you had Experiences of your Eyesight Freeze Framing a Scene or a Past Visual Scene being Replayed in your Visual Field?

If you have then could you leave a comment below describing what you experienced or what you can recall of what you remember of what another person said they experienced.

How likely is it that someone, anyone . . . even just one person will have any of the above vision effects? Effects that are ONLY possible if you’ve either some zoom enhancement applied to an entirely artificial eye and or some digital vision save, search, recall and or replay enhancement technology which also has a zoom feature.

What are the chances?

Well, if you are living on a real world, within a real reality they’d be zero . . .

Unfortunately the ‘incidence’ of the above described very specific anomalous vision experiences turn out NOT to be zero . . .