William Corliss started to ‘personally’ make a record of anomalies that he become aware of while reading various respected science journals, at some point he then started to publish these online (‘Science Frontiers On Line‘) initially somewhat ‘sporadically’ from Sept 1977 and then bimonthly from 1982 until his death in 2011.

His very first online ‘Science Frontiers’ subjects/topics listings being presented that week is typical of them all and is presented below so you’ve some idea of both the format and the science subjects he covered.

In myself ‘personally’ having in some cases, very large numbers of a few types of anomalous experiences, whilst also originally being a Medical Research Support Scientist & then later the Manager of a University Central Resources Facility then I’ve been interested enough to personally spend time checking out many of the ‘Science Frontiers On Line’ listings of science recorded anomalies. 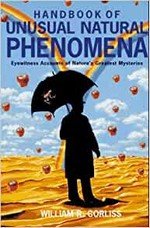 Over this period he also compiled and made available various volumes on some very specific science categories, (I’ve listed these below). Although he also produced a book called the Handbook of Unusual Natural Phenomena which provided examples from a reduced selection of subjects and categories that the public might find interesting.

I’ve the above book and I’ve also got: Biological Anomalies: Humans 1, as well as Inner Earth A Search For Anomalies too!!!

Total Number of Recorded & Published Source Project Anomalies comes is then over 20,000

Now, I’ve deliberately included this science recorded anomalies sections, while also deliberately including the individual catalogue anomaly numbers as well as total numbers of references of anomalies recorded both for individual subjects and then for each science category specifically because it’s possible that some people may actually have the entirely utterly, utterly false impression that ‘anomalies’ actually noticed by science are rare!!!!

WHEN THEY ARE ABSOLUTELY/UTTERLY: ABUNDANT

However, what is likely rare, is for any scientist or science focused person to actually have any realistic perception of both the variety/diversity as well as the VAST NUMBERS of Science Recorded Anomalies!!!!

I’d expect that ‘IF’ our reality was actually really real/natural then:

So, based on all the anomalies recorded by science, it is AN ABSOLUTE AS WELL AS ‘INDISPUTABLE’ FACT that every main science discipline area literally presents over a 1000 RECORDED ANOMALIES.

However, overall, Geophysics is the outright ‘anomaly’ winner with a total of 5814 ‘source project’ recorded anomalies, although coming in 2nd we have the Geological catalogues documenting a further 3662, that gives us a GRAND TOTAL of 9,476‬ anomalies specifically encompassing the EARTHS CORE/FOUNDATION STRUCTURAL INTEGRITY AS WELL AS ALL SURFACE SKIN/LANDSCAPE FEATURES TOO!!!!

Coincidentally, if the surface of the Earth is actually ‘really’ made up from ‘selected’ surface landscape parts taken from elsewhere and then all stitched together patchwork quilt like then perhaps the massive numbers of ‘geo-‘ related anomalies shouldn’t be to surprising!!!!

Hence, from my perspective a presented as supposedly ‘serious’ science based documentary type production that specifically includes the worlds ONE STRANGE ROCK in its title which is very specifically about our ‘strange’ planets origins, it’s geology as well as the planetary scale ‘integrated’ biological process’s that results in an environment that maintains all the process’s essential to all life here very specifically from a science investigation and research perspective somehow ‘amazingly’ actually manages to present the entire first series without directly mentioning EVEN JUST ‘ONE’, NEVER MIND ‘SOME’ of the 5814 science identified anomalies associated with various aspects of the EARTHS INNER CORE/BASE STRUCTURE/FEATURES/FUNCTIONING PROCESSES (many of which will relate to the past origins of the earth) while also failing to mention any of the 3,662‬ top surface associated GEOLOGICAL FEATURES that are also anomalous, never mind any of the 1,353 anomalies associated with the BIOLOGICAL ASPECTS OF EARTH LIFE, another 1,073‬ specifically associated with ALL MAMMAL SPECIES specifically, nor any of the 1170 anomalies associated with our planets BIRD SPECIES (coincidentally wouldn’t birds/flying species very likely be of different structural designs depending on the gravity and or the type of atmosphere of the world/planet they originated and evolved on!?!?!).

Beyond the above we also have many anomalies recorded that are associated with the rest of our very likely pre-designed multiverse covering all ASTRONOMICAL/EXTERNAL TO OUR PLANET, COSMOS SCALE aspects of our reality that William himself yet again also conveniently catalogued and published resulting in another 2,679‬ science anomalies recorded/noticed by science!!!!

Although I suspect that ‘observing them’ is perhaps the easy part!?!?!?! Shouldn’t the sheer number of science recorded anomalies sort of suggest that something is SERIOUSLY OFF, perhaps even seriously off enough to prompt some pretty base line foundation questions!!!!!

“Why would any alleged naturally arisen, allegedly the result of natural processes happening over a supposed very, very long period of time world/planet present even ONE OF THESE ANOMALIES . . . NEVER MIND JUST THE 20,000 THAT WILLIAM’S MAGNIFICENT EFFORT’S ACTUALLY RECORDED!?!?!”

If you’ve already read the previous pages in this series, then shouldn’t the full scale of the above documented science anomalies beg the question as to whether the exact placement, positioning of each copied and pasted surface landscape piece was all defined and carried out maybe after a week or more likely maybe a month or two’s extended pub crawl/bender or maybe it was all just a bit of an unrealistic stretch trying to copy and paste while converting and positioning many, many, many different alien animal type populations physical habitats from many, many different planets and or disc worlds of likely many, many different environment types inclusive of commonly seen and or well know to the locals surface features and landscapes each perhaps offering different habitat spaces too all having to be recreated/duplicated ‘somewhere’ on the surface skin of our one single exceptionally strange, exceptionally, utterly anomaly ridden planet!!!!

Can you imagine the circumstances where you have maybe 10,000 original multiverse surface landscape areas from different disc worlds or real planets which after being mapped and deep scanned you are going to ‘by and large’ copy and paste i.e. ‘recreate/duplicate’ each of these on the surface of the earth ‘somewhere’?

Wouldn’t this be substantially equivalent to trying to place and fit together say a 10,000 piece jigsaw puzzle, where each piece has to be specifically placed as part of the earths surface landscape, but, (for example) rather than being of some standardized size and shape cardboard jigsaw piece bit with an image on it, it’s actually a massive chunk of some original planet or disc worlds landscape, BUT, it is just one of many, many ‘alien world’ landscape jigsaw pieces which in some cases will very likely be of very different sizes and shapes too!!!

Can you think of any of the multitude of factors that would have to be taken into account when doing this, and hence then ANY OF THE EASILY DEDUCED PROBLEMS & CONSTRAINTS that placing and positioning any of the many, many copied and pasted environmental living spaces and habitats of many. many different original multiverse alien specie cultures onto the surface of one single world will actually result in?

Can you think of even just ‘one’ possibility that will result in some sort of anomalous presentation here?